“As many of you would be aware, the HRA’s CEO, Prakash Adhikari, tragically passed away on October 23 from COVID-19. For those of you who are reading of Prakash’s passing for the first time, I am deeply sorry to be sharing this unexpected news with you. 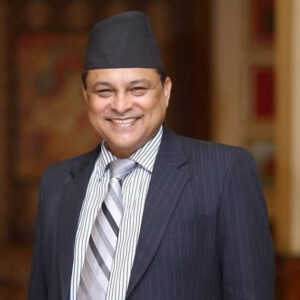 At a personal level, I am still processing Prakash’s death. Prakash had been a mentor, a confidant and a true friend. His absolute devotion to the health and safety of those travelling to altitude in Nepal was truly inspiring. I’m in no doubt that it has led to my ongoing voluntary role with the HRA. I will miss Prakash terribly.

Many members of the HRA community have reached out to me over the last 48 hours to express their grief at his tragic passing. I am sure that those of you that have volunteered with the HRA in the last 25 years will fondly remember Prakash’s warm smile and supportive nature. He was a quiet achiever, working tirelessly to improve porter welfare and the betterment of many porter’s lives. He was responsible for organising rescues and by extension saving the lives of many trekkers, climbers and porters in the mountainous regions of Nepal.

Prakash Adhikari has a long list of accolades and accomplishments for his time on earth, but at the top of my list, I value his heart and his friendship. I met Prakash shortly after my very first trip to Nepal in 1999 when, bright eyed and already in love with Nepal, I applied to work at the HRA in a future year. He was patient and kind, when I was sure that he must tire of the steady parade of starry-eyed potential volunteers who seldom follow through. I got my posting in spring of 2002 and he answered the phone when I called, panicked, en route to a war torn Nepal. My co-volunteer turned back in fear of the violence halfway to Kathmandu: I would be facing the entire season as the only doctor at the Pheriche aid post. He calmed my anxieties, let me know that he would be my support from afar, and sent me to the Khumbu for the adventure of a lifetime. When I returned to Kathmandu at season end with a wild idea to start an HRA tent hospital at Everest base camp the following year, he jumped on board with the idea, excited at the challenge, and believing it was the right thing to do. He corralled the HRA board and helped me orchestrate a dinner in which I unveiled the proposal that was ultimately approved. In 2003 there were many hiccups – financial, logistical, political and more, but he shepherded me through the confusing cultural issues and helped us set up the first Everest ER. Through the years he quietly put me in places where we could influence the players who could help us make that operation successful and sustaining. And when a board chair voiced opposition to the continued operations of Everest ER, he helped make the case to continue; again, quietly and behind the scenes. On my 30-some trips to Nepal, whether I was on HRA business or not, I always stopped to see Prakash to see his smile, have a hug, and feel the warm team HRA spirit he engendered. Prakash, my friend, you will be sorely missed.

Prakash was a pillar of the mountain medicine community and has inspired a generation of doctors to give freely of their skills and time in the service of the Himalayan Rescue Association.

Prakash’s example will live on through his son Binamra who now needs our support more than ever to complete his medical studies. In discussions with Buddha Busnyat, Ken Zafren, Luanne Freer and Jim Duff amongst others, we have decided not to start another contribution platform. For those wishing to financially support Prakash’s family during these difficult times, please do so via Binamra’s GoFundMe campaign that has previously been advertised.

Wherever you are in the world, do take care in these difficult times.” 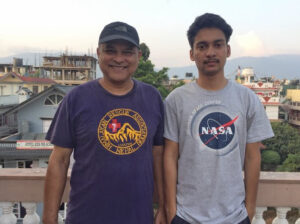 Prakash and Binamra at home in Kathmandu in 2019